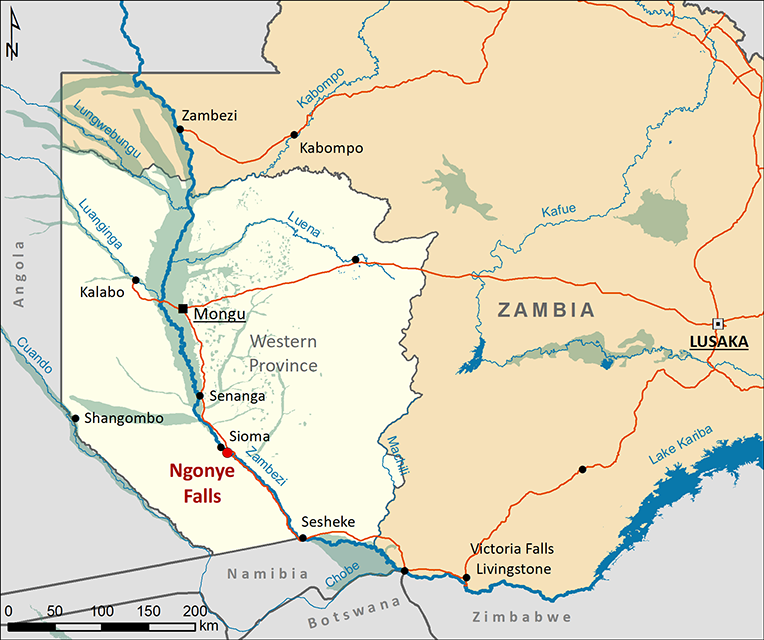 The Ngonye Falls are located on the Zambezi river in the Western Province of Zambia on the border of the Senanga and Sioma Districts.

The falls are around 110 km north of Sesheke where there is a bridge for access into Namibia and 250 km north of Livingstone & Victoria Falls, the border with Zimbabwe. The site is 2 hours by air from Zambia's capital city Lusaka and there is an airstrip 5km from the project site.

Just downstream of the Ngonye Falls a new bridge over the Zambezi carries the main M10 road between Sesheke and the city of Mongu, the capital of the Western Province.

The Ngonye Falls mark the southern extent of the vast Barotse Floodplains on the upper Zambezi River.

The floodplains dominate the hydrology of the Zambezi river by storing rainfall from the upper catchment and slowly releasing it into the lower river.

The floodplains also dominate the lives of the Lozi people who live on them and along their edge.

At Ngonye Falls the Zambezi splits into a number of channels and drops over a series of falls and rapids across more than 1km of the river’s width. Below the falls the river flows in a deep, narrow gorge cut into sandstones.

Publish the Menu module to "offcanvas" position. Here you can publish other modules as well.
Learn More.